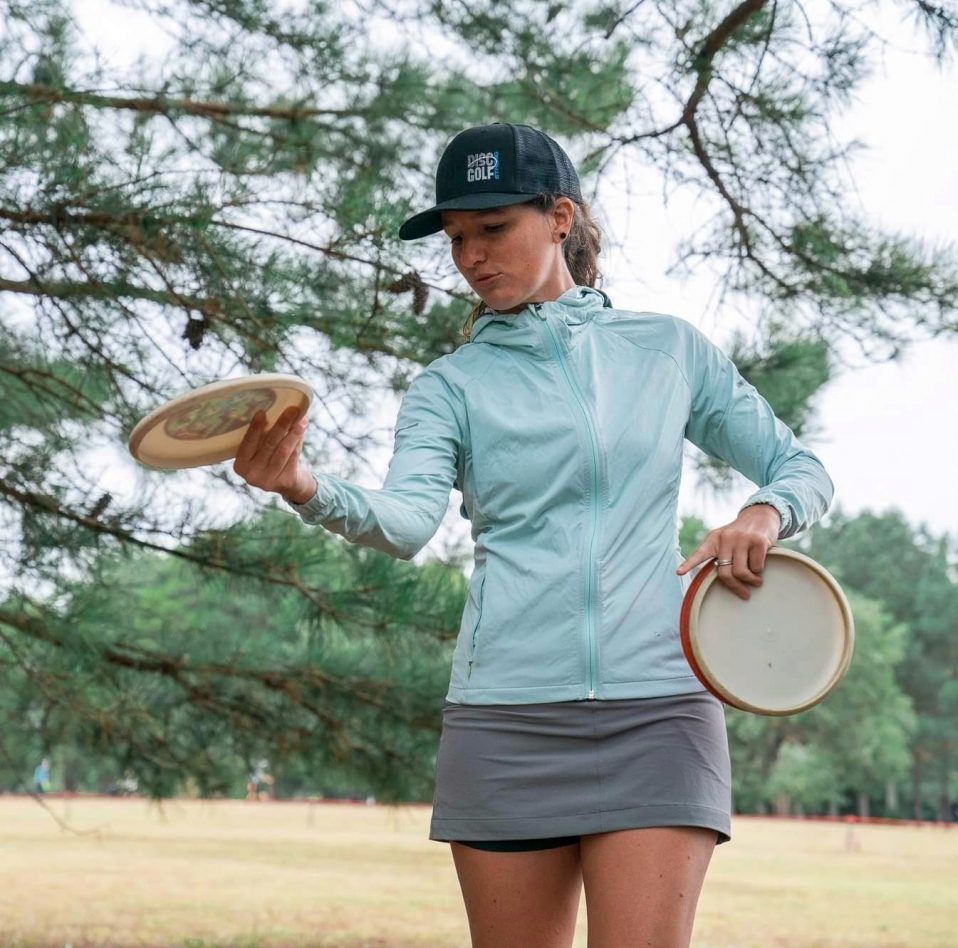 As we stay the course of rolling with the punches in 2020 (this year reminds me of playing a round at Idlewild), another wonderful event has unfortunately bitten the dust, not to be seen again until Fall 2021. The Throw Pink signature event, held annually on the Saturday of the USDGC, turns the spotlight towards women during a week where men typically dominate disc golf headlines. Instead, the event will be held on Sunday, October 11. Founded in 2013, the Throw Pink organization’s aim is to get women and girls out playing disc golf by holding events thoughtfully created just for them. Best of all, their cause feeds two birds with one seed, focusing on female inclusion while also raising money for breast cancer prevention initiatives.

In 2015, after volunteering during the week at the Educational Disc Golf Experience for kids alongside Elaine King, she and founder Sara Nicholson invited me to give a clinic at Saturday’s Throw Pink event with her, Valarie Doss, Hannah Leatherman, and a few other local disc golf professionals. Although it rained all morning, we improvised and moved the clinics inside. Regardless of the less-than-ideal weather, the turnout (and morale!) was immense! Furthermore, the attendees were so jazzed that most even stayed to play a nine-hole round in the pouring rain! Ever since then, I have been hooked on Throw Pink and women’s events in general. 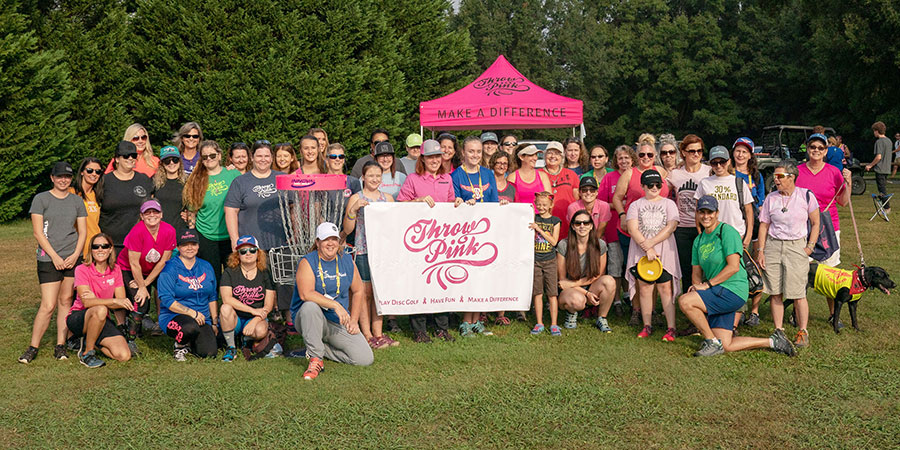 It’s Nice to Meet You!

Something special happens when women and girls show up with enthusiasm and are not greeted with feelings of being secondary. In women’s sports, it is well documented that both initial participation and retention are uphill battles, and disc golf is no different. Women’s events have continually shown to be one of the best methods for climbing that mountain. It’s no surprise that proper courses, a purposefully pleasant atmosphere, and being surrounded by the spirit of other women is the perfect recipe to welcome new women and girls to the sport. Naturally, women’s events have skyrocketed in popularity, and the community of women in disc golf has grown as a result.

Throw Pink has followed suite with the growth, and after a few small years, the event came back with a splash in 2018, being held on-site and highly visible alongside hole 5 of the Winthrop Gold track. In 2018, I gave a clinic with Des Reading, Kona Panis, and Hope Brown, and afterwards Throw Pink participants headed over to play a short temporary course designed by the same designer as the Winthrop Gold competition course. Throw Pink 2019 was held in the same fashion, but with the temporary course revamped and complete with a miniature version of both the renowned triple mandatory hole and the notorious round-wrecking island hole! Record numbers of women showed up to play the course, and additional clinics from Disc Golf Strong and a rock star cast of local and touring professionals did not hurt the cause. 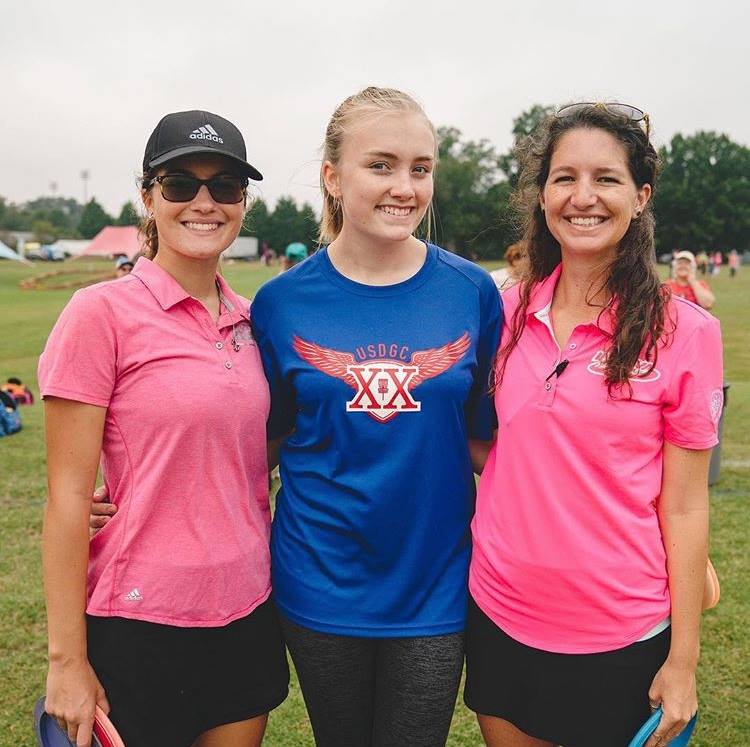 We Can Do More

As a woman disc golfer focused on female participation, I could go on and on with suggestions for local clubs, putting leagues, tournament directors, and disc golf companies. As a sport, disc golf has a relatively short history, but even in that time span, there is a lengthy record of people who have worked towards growing female participation. Although I love seeing women step up and step into leadership roles that make a direct positive effect on the women’s community, I don’t want to place the responsibility solely on the shoulders of these hardworking and powerful women. A more realistic approach to growth is to share the load, since, after all, women still only make up a tiny ~10% of the disc golf community.

What I’d like to see (and what I already see happening in some tiny corners of the disc golf world) is the largest demographic in our sport pick up some slack and make women’s inclusiveness a priority. Putting women’s disc golf on a pedestal, even just temporarily, above tournament purses and media coverage, can make a monumental difference. Taking the initiative to do things differently than they’ve always been done and to get the ball rolling by finding a way to get all eyes on the issue at hand, could have a historical effect on women’s participation. It will be risky, it will take creativity, and it will definitely have backlash, but the trials of being bold and taking chances could come with drastic improvement in a demographic that doesn’t quite seem to fit seamlessly in the sporting world. Drawing attention to something that makes people uncomfortable sometimes sparks inspiration to change, and change is what we desperately need. So, bring it up at your player’s meeting, find donors just for the women’s purse, give local ladies free entry into putting league, and simply talk about it with your card mates in your casual rounds.

Right now, watching a little girl at a women’s clinic connect with her first good drive and seeing the stars align in her eyes, sadly gives me mixed feelings. While I have hope that she’ll fall in love with the flight of a Frisbee, I also feel dread for her, for the frustration, the push-back, and the feelings of inferiority she will inherently face as a female athlete. There is no clear fix right now. No right answer. However, through events like Throw Pink, I see a glimmer of hope for big things to come. Check out women’s initiatives in your area, and if there aren’t any, consider stepping up and bringing something new to the table! 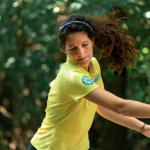 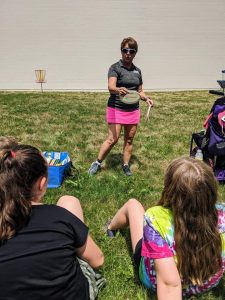 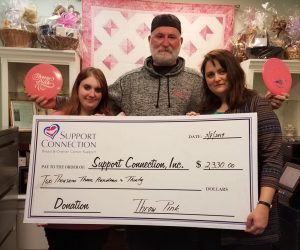 Become a Volunteer in the Disc Golf World

What is a Volunteer?

A volunteer is someone who donates their time and skills for a cause, event, or organization. Those people are always in high demand! Many communities, including the disc golf community, are 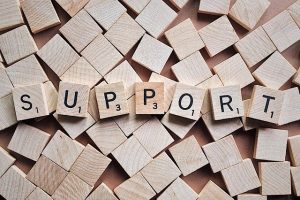 Giving Tuesday: How You Can Support Nonprofits

Giving Tuesday: How You Can Support Nonprofits Giving Tuesday is right around the corner on December 1, 2020. It is a global movement centered on